Are Your Emails Putting People to Sleep? Here’s How to Fix it. 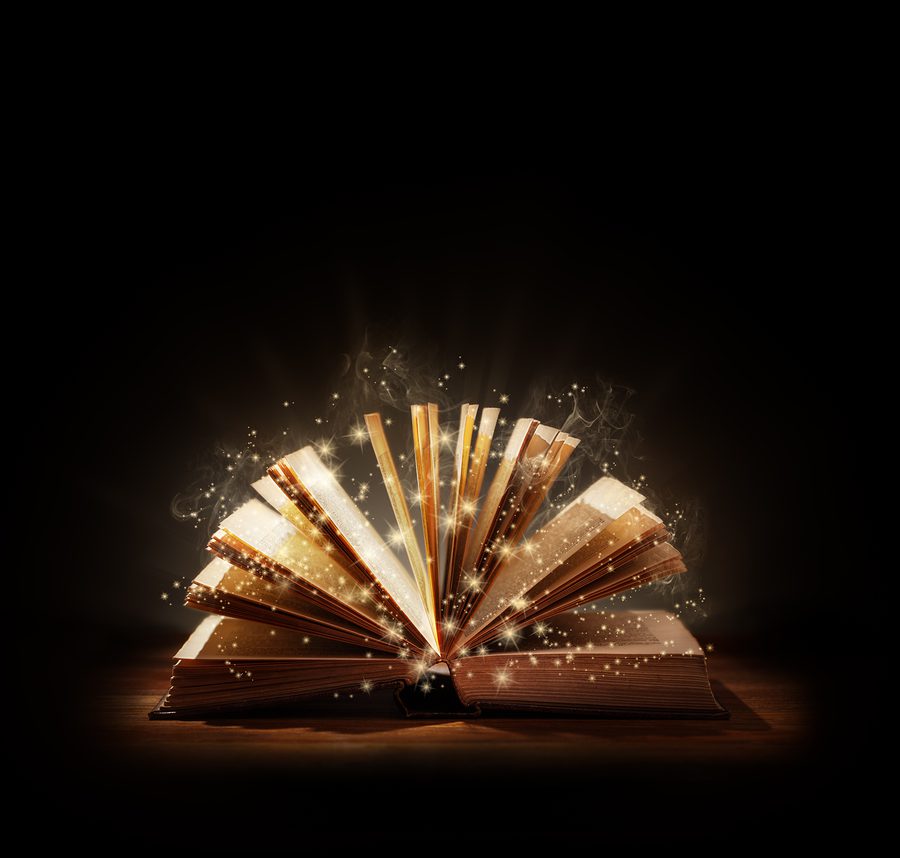 We’ve all been there.

You spend hours writing a good email. You’ve got a killer subject line, you’ve focused on benefits instead of features, and you’ve given people a strong call to action. You press send,  sit back, and wait for the money to roll in.

After an hour of refreshing your stats, you realize something is wrong. People are opening your emails, but they aren’t clicking any links. You double check the email to see if you messed up somewhere when you realize there’s no error. The problem is that your email sucks.

If emails aren’t engaging, people won’t read them or click links. Your email will be deleted and all your work will be for nothing. So how do you avoid this scenario? How do you make your emails engaging? The answer is storytelling.

In this article, we’re going to take a look at how to use storytelling to write better emails. We’ll also give you a bunch of resources to learn more about how to make your emails irresistible.

How Storytelling Grows Your Business

With the rise of the internet and other technology, it’s easy to forget we’re all still human beings with basic wants and needs. We think we can write a bunch of copy that makes logical sense, and people will buy what we sell.

But even the most stoic person on the planet is still an emotional creature. Every decision we make is backed by emotion.

In fact, a study done by Antonio Damasio shows that people who can’t process emotions due to brain damage also can’t make effective decisions. Our emotions — our gut feelings — help us decide what’s good for us.

However, you can’t just make someone feel something with a command. You need to guide them through the experience. This is where storytelling really shines.

When people listen to a story, their brains “link” themselves to that of the storyteller, which allows them to experience the story themselves. This is called neural coupling.

Storytelling is great for business. In one experiment, Rob Walker and Joshua Glenn bought a bunch of thrift store items (at $1.25 a piece on average) and had writers create short stories about them. The objects would then be sold on eBay using the stories as copy. As a result, the objects sold for nearly $8,000 in total. In one case, the egg whisk below was bought for $0.25 and sold for $30. 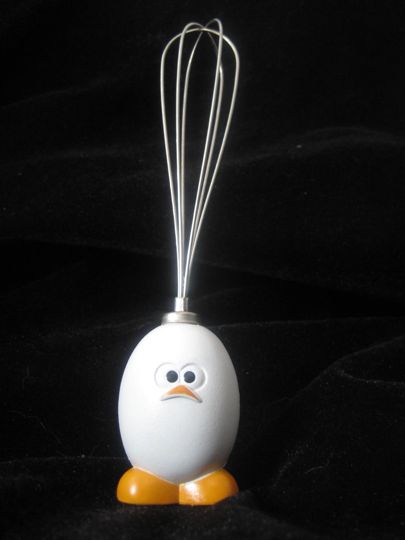 So yeah, stories are pretty neat.

Why Email is Perfect for Storytelling

Email is one of the more personal marketing channels out there. With Twitter or Facebook, it’s usually obvious that one person is broadcasting his or her opinion to a group of people. Email allows for a much more personal approach. This increases the impact marketing has on your audience.

It also allows you to take your storytelling efforts even further. When campaigns consist of several emails, each email can be treated as a chapter in a story. Each one is a beat or a scene in a story that moves things forward.

One thing to point out, though, is you don’t need to be the next Pixar or Disney to come up with an engaging story. E-commerce, for example, doesn’t always allow you to tell an elaborate story to promote your products. If you have to come up with a unique story for every single product, you might as well find a job at Dreamworks because you’d be a storytelling monster.

Types of Stories to Tell

There isn’t one type of story that will help every business on the planet. Some stories work better for you, others won’t do anything. Let’s go over some of the basic story types to choose from.

A case study tells the story of how you, or someone else, overcame a problem and what was done to overcome it. They’re incredibly valuable because they tend to be unique and shows your audience how you think about a problem. Neil Patel, for example, used case studies to grow his sales by 185%.

Testimonials, on the other hand, are great for building social proof. It’s one thing to tell people you’re cool, it’s something else to have other people say it. Testimonials make for credibility.

The great thing about a good origin story is it gives you the chance to let your audience know who you are and what you’re all about in a compelling way. Think of it as an about page, but in email form, and more exciting.

Here’s an example of an origin story from Nerdfitness. 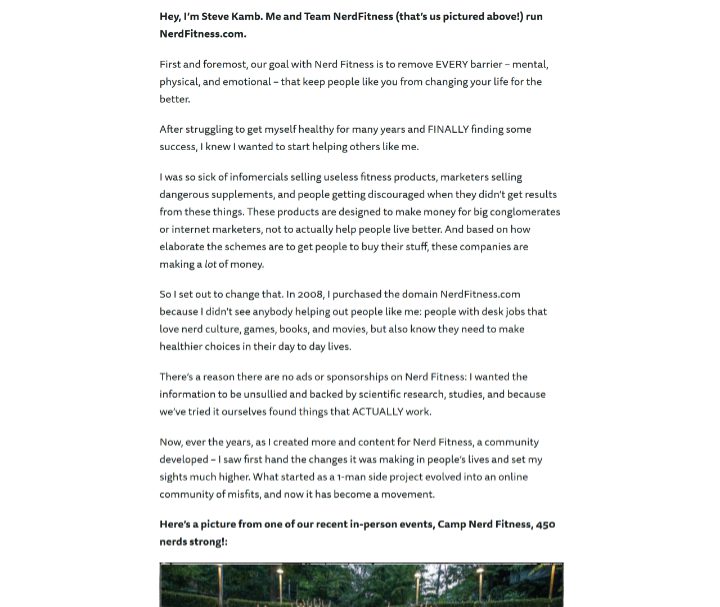 Steve talks about how he came up with the idea and how he got to where he is today. This type of story helps people understand the “why” behind what he’s doing.

The most common type of stories are those that build rapport and show your audience a personal side. These can be about anything really, as long as it’s engaging and entertaining. Here’s an example from Ramit Sethi: 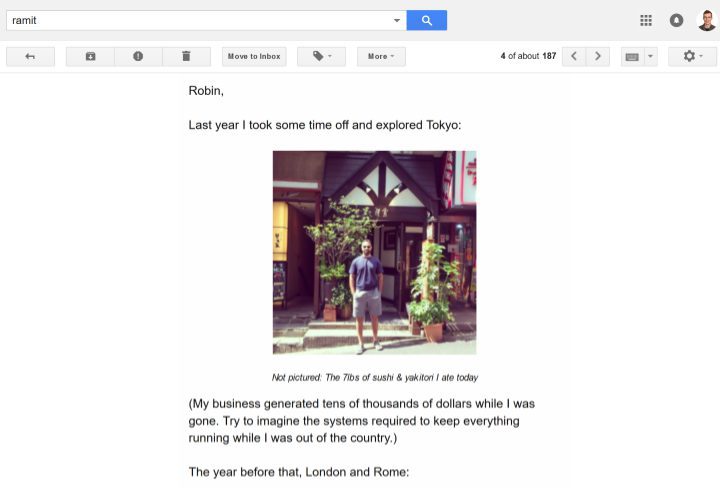 In this email, Ramit gives his readers a glimpse of what’s going on behind the scenes. He tells stories about his business and what’s going on in his life. Ramit frequently asks readers to write back and tell him what’s going on in their life. Interactions like this build rapport and make readers feel like they’re interacting with a real person and not just a business.

A vision story is used when you want to rally your subscribers and get them to support a cause. It’s very motivational in nature and will show them what you are about and what you’re trying to do.

The Building Blocks of Incredible Stories

Even though we’ve been confronted with stories our whole lives, we often don’t know what goes into them. Where do you start? What makes a good character? What do you talk about?

From the outside, stories look simple. But when you take a closer look at the different elements, you’ll see a lot of moving parts, some that require planning. Let’s look at some of the major parts.

Creating a good character is crucial for writing amazing stories. If you mess up the character, your story just won’t be as good.

But what makes a character good? Good protagonists have several characteristics:

It may sound counterintuitive, but the most interesting characters are highly imperfect. Just think of a popular character and think what’s wrong with them. The Joker is a raging maniac, Tony Stark (aka Iron Man) is egocentric, and Winnie the Pooh is addicted to honey.

None of these characteristics are technically good, but they make the character unique and memorable.

If your character is a perfect being that succeeds at everything, no one’s going to relate to that person and you won’t connect with your readers.

So when you’re telling a story through email, don’t aim for perfection. Show your imperfections.

In its most basic form, a story is just a series of events. Every story has a:

Your character does something, a problem occurs, then they find a way to solve the problem. That is the basic structure. Of course, you can make it more complex. In that case, use Freytag’s Pyramid or Pixar’s Story Spine.

Gustav Freytag was a 19th-century German novelist and playwright who came up with a structure to create drama in a story. It goes something like this:

Provide readers all the background information they need to know what’s going on. This includes the character’s backstory, the setting, and other important info they need to get immersed in the story.

The tension builds and things are starting to get worse for your character. The readers get to see the hero mess things up.

Then, something happens. Your character realizes the way they were previously behaving isn’t working and they need to change. They overcome their biggest weakness and start to turn things around.

Falling action provides readers with a final moment of suspense. The situation is still shaky, but your character is starting to gain control. The good guy prevails over bad guy.

At the end, everything turns out ok (or not, if you want it to become a tragedy). Conflicts are resolved and your character is better off than before the story started.

If this structure looks and sounds familiar to you, it’s because it’s used in everywhere. From movies to books to commercials. Every medium that uses storytelling has used Freytag’s pyramid at one point or another.

If there’s one company that knows how to tell a good story, it’s Pixar. They’ve nailed the storytelling process, with multiple box office hits to show for it. Not only that but in their Khan Academy lecture, they teach others how to tell a story they way they do.

The way Pixar builds out a story is by mapping out the story beats. These are the most important moments in the story. They use the following structure:

This structure helps you lay out the beats of your story. With email, you can turn every beat into its own email, or you can mash them all together in a single email.

Theory is great and all, but let’s look at how storytelling can be applied to email marketing.

Below is an example of a simple sales sequence. 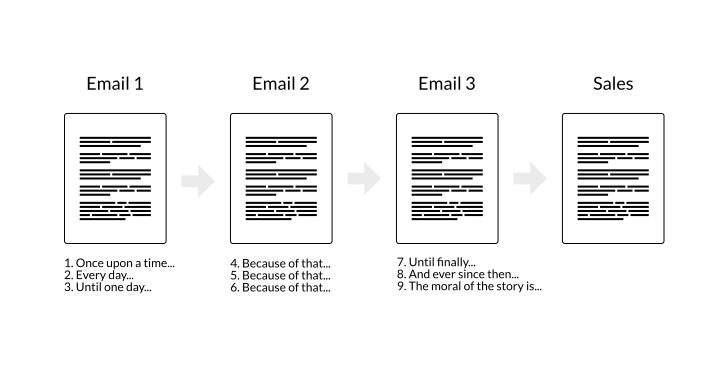 If the structure above looks familiar to you, it’s because the PAS framework (Problem – Agitate – Solve) is rooted in the basic story structure. It has a setup, a conflict, and a resolution. It sums up the whole story structure nicely.

Of course, you can make it as complex as you want. You can use the entire structure in a single email, or you can spread each step out across different emails.

Open loops are like cliffhangers in movies or a TV series. They start an idea or action, but don’t reveal how it ends until later on in the movie (or in another season). This is how they can keep you coming back over and over again.

Use this in your email marketing. Start an idea in one email and end it in another. Here’s a visual representation: 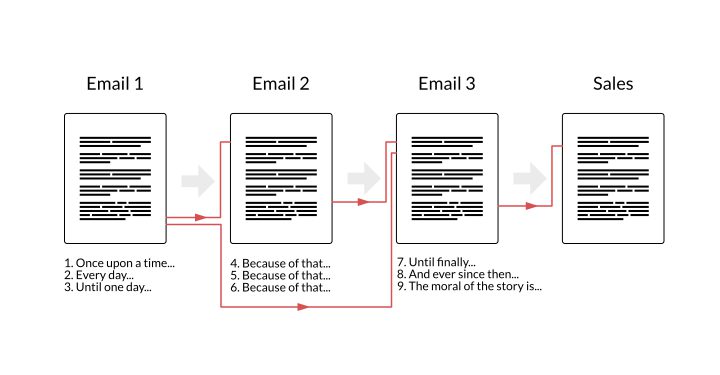 When you start an idea at the end of one email and close it in another, you create anticipation and make email campaigns more fun — something a lot of marketing campaigns lack.

As humans, we remember unfinished business better than things that we have completed. This is called the Zeigarnik effect.

One of the things you can do to make your emails more powerful is to use personal language. Instead of just using a first name and speaking about yourself, talk to them and use “you” and “I” (or “we,” if you’re an organization) a lot.

In reality, you need to sound like yourself (or your company). If there’s a disconnect between how you normally communicate and how you communicate in your emails, people will notice.

Storytelling sounds simple until you have to do it yourself. Then you notice it requires quite a bit of knowledge and skill to create a good story. But once you get the hang of it, it becomes easy. You just need to pay attention to a couple of things to make your email a lot more interesting.

What other tips or tricks do you have for telling great stories via email? Share with us in the comments!

Robin Geuens is a freelance content marketer who helps businesses write content that gets more traffic, subscribers, and leads. You can find him at Atompilot.com.